Mollies are one of the most popular fish for aquariums because they’re easy to care for and come in many varieties. Mollies give birth to live young, unlike other types that lay eggs. The pregnant Molly fish is a delicate species.

With their live-bearing ways, they need to be separated from other fishes in the tank because those other fishes may think that any eggs or newly hatched fry will make for an easy meal!

After all, once your molly has given birth and is ready to protect her young ones – you want them safe with momma not out there battling it out against hungry mouths.

The Molly Fish is a breed of guppy, which means that they are livebearers. An adult fish female will typically give birth to 20-100 babies at once and the pregnancy lasts for about 2 months on average.

The baby fish can become prey in their own tank (even to adult mollies) if other creatures like hungry adult mollies find them first so it’s important to keep an eye out during birthing time! 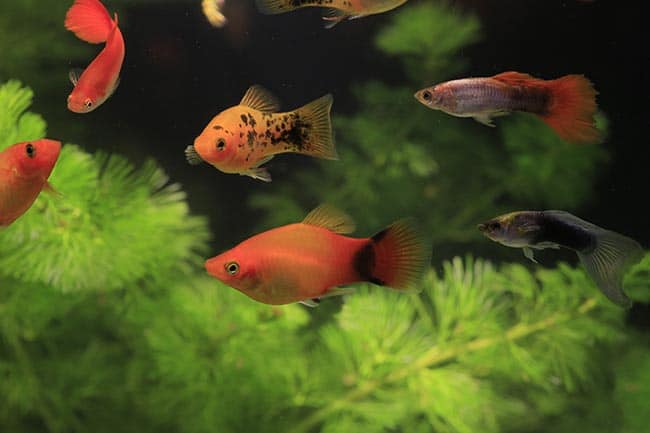 How To Tell if a Molly Fish is Pregnant

Be on the lookout for any changes in your female molly fish. Some of these behavioral changes include staying away from other fish, moving slower than usual, and eating more food!

How Long Are Pregnant Molly Fish Pregnant For?

Female mollies will gestate their young for about 3 months or sixty days. They typically give birth to between 40 and 100 molly fry, however younger molly fish tend to give birth to a smaller number of molly fry than older moms.

Identifying When a Pregnant Molly is About to Give Birth

Fish give birth in amazing ways based on their evolution. When your female molly is going to give birth to molly fry, she will start showing some telling signs.

First off, you may notice that she becomes more active and moves around a lot inside her aquarium or tank in anticipation of the new molly fry that is on its way.

Second of all, the mother fish’s belly begins to swell up as well (both genders can get pregnant).

Thirdly, it seems like they are swimming erratically in circles in the tank which could be an indication of something big coming soon!

When a female Molly goes into labor; She’ll become very playful with herself while trying desperately not to fall behind on any feeding schedules. Her stomach will begin swelling at first but rapidly decrease until only half of its original pregnant size.

Parents of livebearing mollies give no parental support to their molly fry, and they are most commonly eaten by both molly adult parents as well as other fish species in the aquarium. A breeder tank or breeding box is a good way for you to keep all baby molly fish alive after the pregnant molly gives birth and releases them into another tank compartment away from her.

The baby molly fish can then stay in the breeding box, away from the fish tank, until they become adult mollies themselves. Introducing them back into your main tank when the time is right and they won’t be seen as food by the other molly fish or predators lurking in your fish tank.

How long do you Keep Baby Mollies Separate?

Baby mollies should be kept separated from the main tank for as long as they’re large enough to feed the other fish.

When can I put my Molly Fry in the tank?

Around two weeks after hatching when they are large enough to not be mistaken for food anymore they are okay to not be in a separate tank. After their release into the main tank or an additional separate tank depends on their size and how many molly fry you have hatched.

How often do mollies breed?

Mollies can breed directly after giving birth at around 30 to 40 weeks on an average and can reproduce two – 2.5 years after sexual maturation. Female mollies store sperm before mating so that a male is

Platy vs Molly Fish: How to Tell Them Apart

What Do Guppies Eat?

How Many Neon Tetras in a 10 Gallon Tank?