Land Moss can be a great addition to make your aquariums look more natural and beautiful, but, can moss grow underwater?  However, some people are confused about whether it is safe for their aquatic life in the tank. Rest assured that land moss will not hurt any of your fish or other underwater friends! In this article, we discuss how to keep the moss healthy and happy while also keeping your fish alive and well.

Are you considering the addition of a new aquarium to your home? Or does it appear that yours has been recently neglected and could use some sprucing up? While there are many different and expensive types of fish, invertebrates, corals, reefs, or other features one can incorporate into their aquarium; don’t despair! The solution is right under our noses. Moss grows on tree bark all over this big blue marble we call Earth–why not in an aquarium too?!

Yes, the moss that thrives underwater is often hard to find, but not impossible! Java Moss and Fire Moss, which make for a great starter plant as parts of your aquarium decorations, are the most popular types of water-dwelling plants. Before you purchase them from a garden center or online retailer, be sure to do your research so they can thrive in their new home – despite needing some maintenance after transplantation into your vessel.

Preparing Your Land Moss For Aquariums

Land moss can grow underwater. However, depending on where it’s purchased, then it may need to be prepared before using it for a fish tank decoration with other aquatic plant life.

There are several different myths about how to grow moss for aquariums. One of the most popular is that it can’t be done, as this plant needs soil and light in order to thrive.

How to Add Land Mosses to a Fish Tank

To get started, you’ll need something called “moss nurseries.” These come in many shapes and sizes: including glass jars, plastic bottles or anything that can be easily moved around. 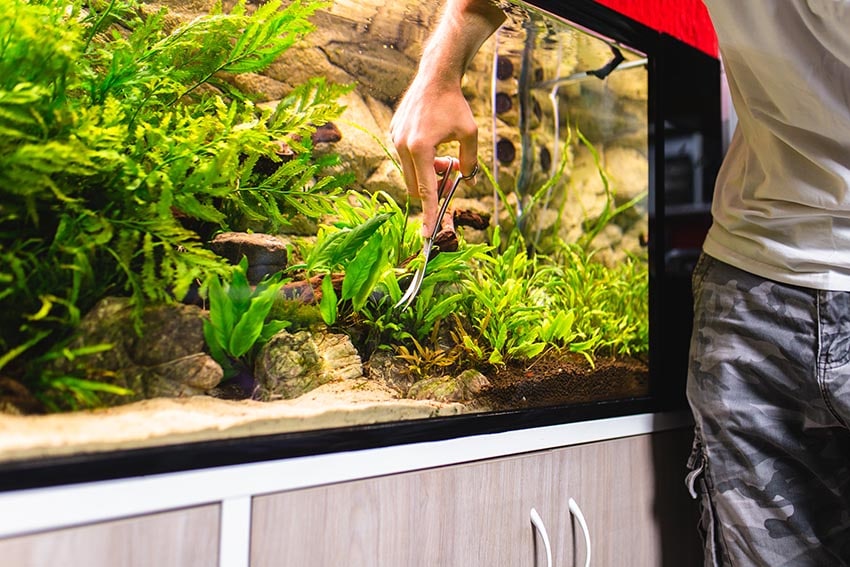 Once you have your moss nursery, it’s time to start growing the plants! Use only unchlorinated water in every step of the process or risk killing your moss and possibly your fish.

1) Soak it in a shallow dish of water to remove any dirt or debris. Use gentle strokes with the bristles when washing, and do not pluck at roots!

2) Take the newly cleaned moss and gently set it into a container that can allow for it to be completely submerged. Remove any final loose debris from the moss.

3) Put your container on something like a bedside table and keep it open away from direct light like on a windowsill. Light levels are important in this stage. Place a lamp nearby to avoid direct sunlight, which can heat the water too much as moss is sensitive to higher temps. If you notice that more water evaporates than usual from your sponges/stones, add fresh H2O until they are covered in moisture again! Combat evaporation by simply adding more H20 at proper water temperatures.

4) Let the moss sit underwater for 2 to 3 days watching for the appearance of mold buildup. If mold starts to appear, the moss is not ready and must be re-washed.

5) Repeat the process until no new mold appears and check repeatedly. Once mold growth is non-existent, it is ready for the aquarium.

Caring For Land Moss in an Aquarium

Fire moss and java moss are the types that seem to do very well in an aquarium but some requirements for moss growth are a must. 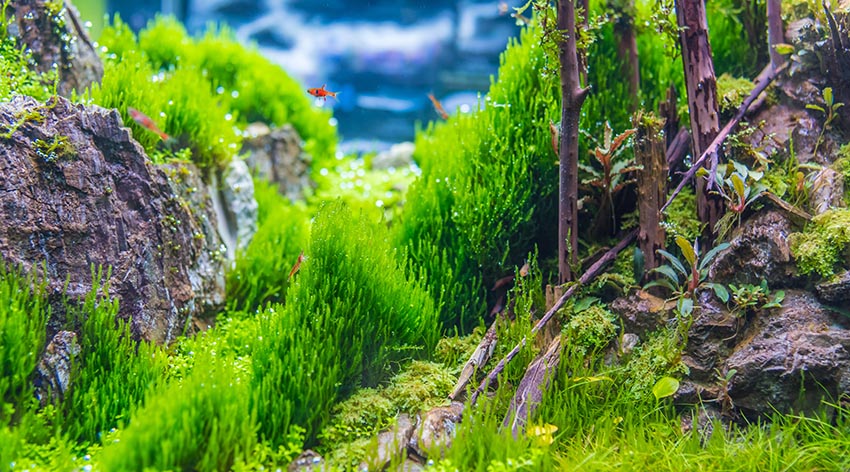 Fire and Java moss can grow together and can create unique fish tank decoration environments. Fire Moss spreads upwards in columns whereas Java Moss tends to spread horizontally. Combining the two can create a very cool aquascape for your fish.

The advantages of these two land plants are they can be slow growers and don’t need too much maintenance. The main advantage with Fire Moss is that its growth pattern ensures minimal upkeep because it does not grow sideways but rather up towards the sun’s light

Fire Moss is an excellent choice for Fishkeepers who don’t want to trim their live aquarium plants very often. It doesn’t spread width-wise and grows in the direction of sunlight, which means that it grows upwards instead of outwards. So long as you have a few hours each month dedicated to caring, it will not take over your aquarium while still staying manageable! 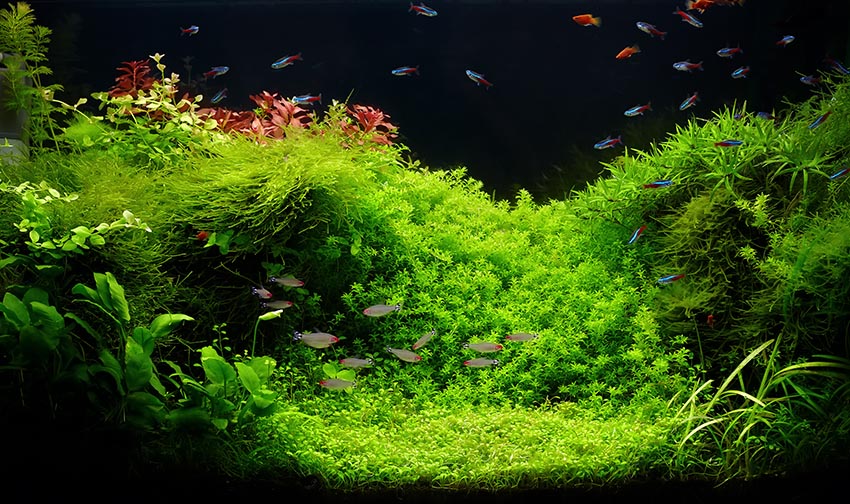 Java Moss is a type of aquatic moss that can grow wild or be trimmed into specific shapes. All you need to have for this are scissors, tongs, and other tools to help with planting and removing debris. This type of moss is a good option to use in your aquarium if you want something that will stay put!

If you’re looking for the perfect plant-based habitat, then Moss Balls are a good option that will save you time. They grow on rocks and wood inside an aquarium, slowly spreading over time until they form green carpets that provide shade

Tank owners find that using moss in an underwater aquascape is an easy way to create a natural and organic look without having to spend hours trimming plant leaves.

Land mosses can be left as floating plants in the tank water, but this means they lose their impact because, in many tanks, they won’t be seen. Both Fire Moss and Java Moss are better suited when planted underwater due to how much more beautiful these two varieties of mosses become underwater than above it!

Spores float. The best way to keep this plant in place is by using some sort of plant support for all varieties. Plant support will anchor them and stop them from floating away, while also providing a resting spot that increases their surface area and enables better absorption of nutrients. 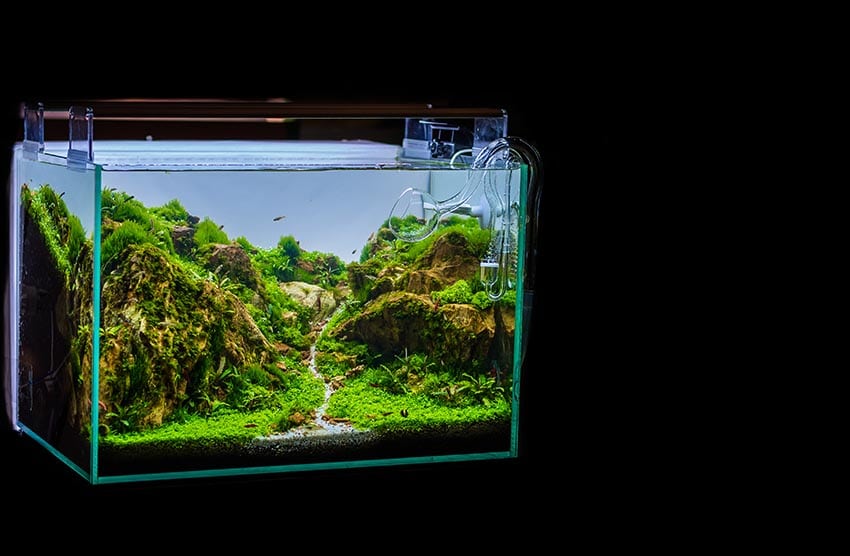 You can use plastic netting, strings, or a fishing line to secure the mosses to the substrate or other decorations. Mosses will naturally adhere to decorations in your tank over time, but this will help keep them where you want them until then.

After about 20 days in water, you will be able to remove the plant support, such as a fishing line, and the moss will naturally cling to where you placed it underwater.

This is a good time to remove anything that you no longer wish it to adhere to and cover aquarium decorations with moss.

The best way of removing plant support from live plants and ceramic decorations is by using a razor blade or sharp scissors in the aquarium, as this will avoid damaging your new live plant nursery. You can also use tweezers for smaller pieces.

An aquarium with algae is an unattractive sight and a source of unhealthy tank water. What’s the point in having one if you can’t enjoy it to its fullest?

As you add mosses and other live plants to aquariums and using a quality water source, the prospect of algae increasing is definite, but there are some solutions to help combat the potential of organic growth leading to algae.

You may have already heard of Amano Shrimp, also known as Caridina Japonica. These scavengers are well-known for eating soft algae in the water and decaying plant matter. You can add these shrimp to your fish tank so they can take care of all the dirt around it! 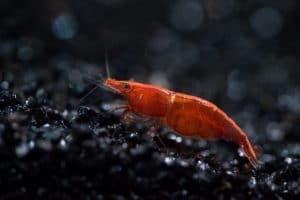 Known for their calming effect, Mosses are a great addition to any aquarium. They are easy to maintain and can be found in ready supply near water, in nature, or at your local pet store if you find that moss from down by the water doesn’t do well.

If it’s up to you whether or not you want to put some effort into locally collecting land-based mosses (or purchasing them!) then this article will help guide how best those living creatures with gills should live out their lives so they too may experience life as we know it!

Is it Safe to Put Hotwheels in a Fish Tank or Aquarium?